PMI CEO/Executive Director Kerry Stackpole testified before the Office of the United States Trade Representative (USTR) on the unfavorable and consequential impacts that Section 301 tariffs of up to 25 percent on $200 billion worth of products imported from China would have on U.S. plumbing manufacturers, the economy, and consumers.

Dozens of plumbing-related products and components were included on List 3 of these tariffs. The $200 billion list targeted furniture, cabinets, lighting products, chemicals, plastics, seafood, and variety of metal components and machinery. If implemented, the tariffs would result in significant supply chain disruptions and increased costs, thereby having a detrimental impact on American plumbing manufacturers and their workers, on the construction sector, and on retailers and consumers, Stackpole testified. Read his full testimony.

In addition, PMI held an in-depth webinar on the Section 301 tariffs (Lists 1, 2, & 3), and the exclusion process in August and posted regular trade updates for members.

PMI saw its many of its positions and recommendations adopted by technical committees and policymakers.

Americans using less water in their homes than at any other time in the past 50-plus years, according to a recently released U.S. Geological Survey (USGS) report. The report estimates per-capital water consumption to be 82 gallons per day, lower than the average yearly per-capita consumption that ranged from 89 to more than 100 gallons per day during the 1960s and 1970s.

According to a summary of the report published by the Washington Post, the USGS credits water-efficient plumbing products for reducing home water use, naming federal efficiency standards for toilets, faucets and showerheads set by the National Energy Policy Act of 1992.

The EPA estimates that 70 percent of total home water consumption happens indoors, with the remainder going to outdoor uses.

PMI launched an enhanced website, with an emphasis on creating an easier user experience for members. A newly created dashboard on the members-only section of the upgraded PMI website lists the latest reports, news, events and more - providing PMI members with valuable information on breaking issues that can be used for business planning, implementation and evaluation. In addition, much of the content throughout the site was rewritten or refreshed while maintaining the site’s excellent search engine optimization.

PMI actively advocated to preserve EPA’s WaterSense program, which was once again slated for elimination in President Donald Trump’s budget. PMI and allied groups worked to secure language in both the Senate and House Interior-EPA Appropriations bills directing the EPA administrator to continue funding the successful WaterSense program. PMI met with dozens of congressional offices to underscore the importance of the program and the need to insert language in the appropriations measure. The Senate committee instructed the EPA to continue the program at its current funding levels. The House committee report simply directs “continued funding” for WaterSense without reference to a particular spending level. On July 19, the House passed its FY19 Interior-EPA Appropriations bill, which funds EPA at $8 billion. On Aug. 1, the Senate approved a FY19 “minibus” appropriations spending package consisting of four appropriation bills, including Interior-Environment.

PMI Recognizes Rep. Ken Calvert for His Leadership on WaterSense

PMI is thrilled that lawmakers in both the House and Senate have voiced continued support for WaterSense. PMI Board President Peter Jahrling and PMI CEO/Executive Director Kerry Stackpole presented Rep. Ken Calvert (R-Calif.) with a PMI industry award recognizing the legislator’s leadership and strong support in maintaining the WaterSense program within the EPA for both the FY18 and FY19 appropriations cycle. The congressman serves as chairman of the House Interior-EPA Appropriations Subcommittee, which has direct oversight of the EPA’s budget. PMI member company, BrassCraft, is located in his district.

In June, PMI held its annual Washington, D.C., Executive Forum and Fly In. Members visited over 20 congressional offices, advocating for the preservation of EPA’s WaterSense program and passage of bipartisan legislation to overhaul the nation’s career and technical education law. Members also highlighted concerns over trade tariffs and underscored the importance of strong funding for water infrastructure. During a half-day forum on the day preceding the Capitol Hill visits, attendees received briefings from policy experts and administration officials. Topics included the U.S. economy, housing and construction, trade policy with a focus on tariff initiatives, the infrastructure legislative package, and upcoming EPA regulations.

PMI members visited with 10 members of the California Senate and Assembly and with California Energy Commissioner Andrew McAllister to discuss a range of issues impacting plumbing fixture and fittings manufacturers on May 8-9 at PMI's Sacramento Fly In.

In a meeting with Assembly Member Laura Friedman, PMI members voiced support and shared ideas about A.B. 3170, a measure she introduced that provides a sales tax holiday for purchases of WaterSense products in California. PMI has supported the measure since its introduction and has shared its research on water savings gained by replacing older and less water-efficient toilets and other fixtures.

The meeting with Commissioner McAllister covered commission initiatives including the recently passed requirement for solar panel installation on new homes in California, innovations in water recycling, grey water use, tub spout diverters, and other developments in water-efficient products. 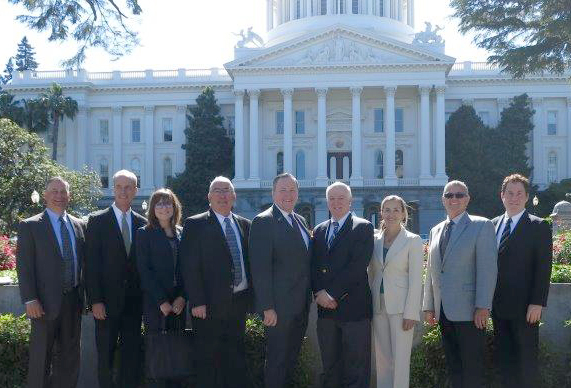 The renowned computer scientist Alan Kay notes that "most creativity is a transition from one context into another where things are more surprising." The PMI Board of Directors made that concept the centerpiece of its work during a Foresight Strategy Session held in Rosemont, Ill., on July 19 and 20.

Hosted by PMI President Peter Jahrling of Sloan Valve Company, the working session was led by futurist Marsha Rhea of Signature I. The board worked with PMI staff and consultants to explore a cross-section of current social and business trends impacting the thinking and behavior of consumers, policymakers, and industry professionals alike. The day-and-a-half session was designed to provide insights into the association's current strategic plan and to support its evolution in the years ahead. The board adopted four key focus areas in 2017 and approved 12 strategic initiatives for 2018-2021. The new foresight research will enhance the strategic focus and direction of PMI

"Just the Facts: Legionella and Water Supply Systems" is a new Plumbing Manufacturers International (PMI) resource introduced to the media, allies and the general public in February. Produced by PMI with the assistance of Legionella experts, this publication is available from the PMI website and as a download. PMI encourages members and allies to use and link to this information and to participate in the social media conversation about this important safety issue by using a social media toolkit including messages (Twitter and Facebook, Google+ and LinkedIn), graphics, and a quiz. 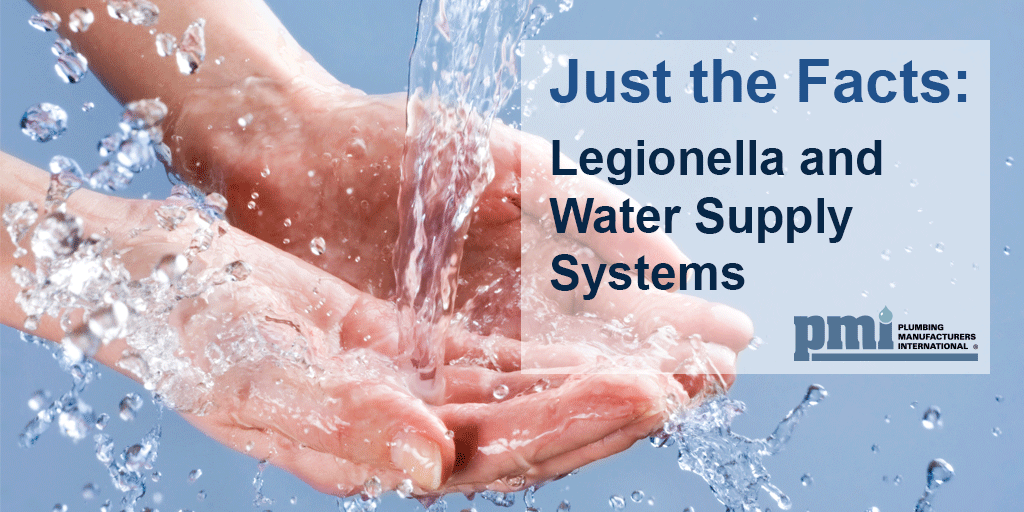 PMI hosted a webinar in March 2018 concerning California Proposition 65, which covered new warning requirements. PMI also provided webinars to members about changes to the Toxic Substances Control Act (TSCA), about lead in schools and selecting lead-free plumbing, and about “What To Expect from NAFTA Renegotiations.” These webinars are still available for on-demand viewing to PMI members here.

The California Department of Toxic Substances Control (DTSC) found that all 54 of the brass fittings tested in 2018 contained less than 0.25% lead, the maximum level set by the Reduction of Lead in Drinking Water Act. The average lead content was 0.09%, with a range of 0.01% - 0.17%. Within individual fitting types from the same manufacturer, minimal variability in the lead content was observed (average coefficient of variation = 8.44%). Thanks to Jerry Desmond, PMI's California government affairs consultant, for passing along this information.

Eighteen different fitting and component types were purchased from the websites of seven different retailers for testing in 2018. These items were purchased in triplicate to assess the variability in lead content within select fitting types from individual manufacturers. DTSC focused the 2018 analyses on brass fittings and fixtures, following the 2017 testing, which evaluated the lead content in a 59 different pipe tees, elbows, and couplings that were manufactured out of copper, brass, bronze, and galvanized steel.

Plumbing Manufacturers International and PMI CEO/Executive Director Kerry Stackpole were mentioned in a Wall Street Journal article about perks and incentives plumbing companies have devised to attract and retain plumbers. Thanks to Delta Faucet Co. and Kohler Co. for responding to PMI's request to provide examples of innovative ways to attract and retain employees to the journal's reporter.

An impressive line-up of speakers provided Emerging Water Technology Symposium (EWTS) attendees insights into how technology is contributing to better water efficiency and safety during the May 15-16 meeting in Ontario, Calif. In his remarks, PMI CEO/Executive Director Kerry Stackpole welcomed delegates and thanked EWTS sponsors. Contractor magazine reported on the opening session of the meeting.

Following concerns raised by PMI and its member companies, the California Energy Commission in early 2018 lowered the priority it placed on proposed regulations lowering the maximum leakage rates of tub spout diverters. The informal pre-regulation docket has not become a formal regulatory proposal at this time. It remains to be seen whether that will change in the future.

The California Energy Commission adopted regulations on July 12, with an anticipated effective date of Oct. 1, that include PMI-sought revisions within the Commission’s update to regulations addressing its Modernized Appliance Efficiency Database System [MAEDBS] and other provisions. The PMI requests correct the provisions that address the minimum spray force for commercial pre-rinse spray valves and add a reference to the industry standards for water closets sold after Jan. 1, 2016.